The marble way of Michelangelo in Versilia

The marble way, an itinerary from Pietrasanta to the marble quarries of Carrara to finish in Forte dei Marmi where to embark on our precious cargo – of dreams and emotions –

Exploited since ancient times, the use of marble binds its history especially to Monte Altissimo, located near Seravezza and chosen by Michelangelo Buonarroti to quarry the marble used for the arrangement of the façade of S. Lorenzo in Florence. Starting from this time the Medici dynasty played a role of primary importance in the development of the Versilia mountains as sources of marble extraction. The exploitation of marble quarries and the solid artistic tradition that followed it have made Versilia a territory still economically fueled by the enhancement of sculptural and artistic production in general. 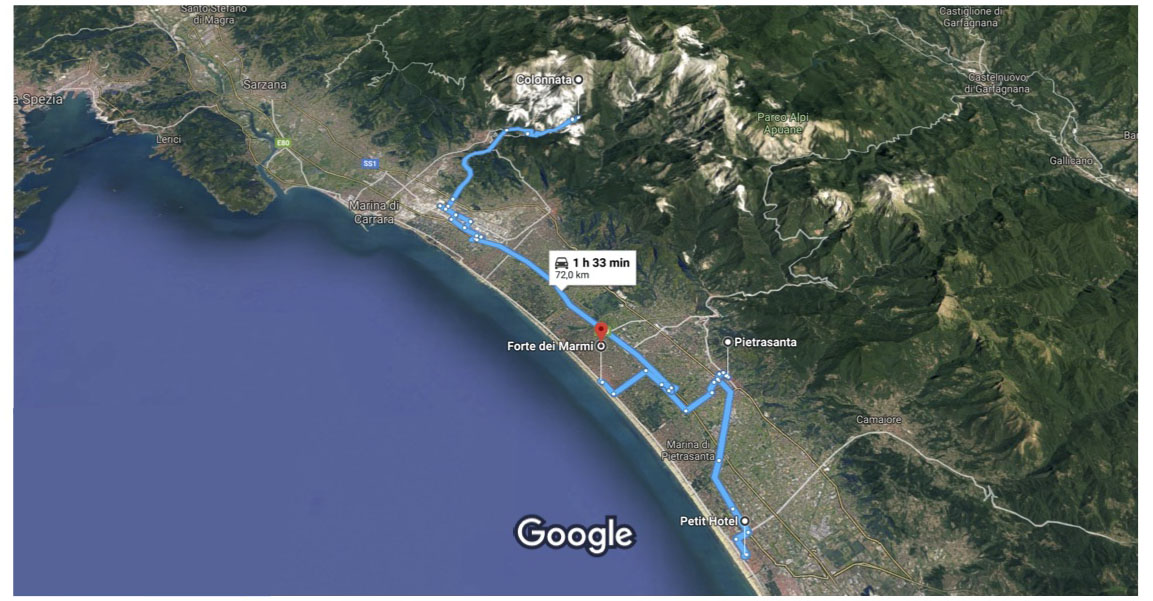 The itinerary suggested is suitable to be done in a day even with children, we had a lot of fun with them; slow and relaxed start after a good breakfast ;-)

The game is to retrace the marble path from the mountains and quarries to the laboratories where it was and still is worked, stop for visiting Pietrasanta, with an aperitif in Piazza del Duomo, and then down to the sea where you can imagine sending the whole block or our sculpture on a ship … and then back home at the Petit Hotel, maybe a little tired but certainly full of emotions!

4×4 tours to the marble quarries

direction Colonnata (stop for a good sandwich with the homonymous lard) and then get ready to “dance” a little especially if you sit on the back of the off-road ;-) guaranteed fun and breathtaking landscapes … for many reasons.

We did this tour for about 1 hour and 30 minutes, with very well prepared guides who told us about extraction techniques, cutting and a bit of history of this territory.

After the 4×4 tour we returned to Pietrasanta (convenient parking at the railway station from where you walk to the historic centre of the city) break and snack in Piazza del Duomo and for the curious and less tired visit the craft shops where you continue to handing down the craft of a sculptor and the Museo dei Bozzetti (established in 1984 with the aim of collecting the most significant gypsum and preparatory drawings made by the sculptors active in the Versilia workshops) a collection of ever-expanding works, made in the early twentieth century and the present day by artists from all over the world.

And here we are at the end of the day in the small town of Forte dei Marmi, 10 minutes from Pietrasanta, which owes its name to the marble deposit that traditionally gathered on its banks waiting to be loaded on boats.

With the Medici of Florence began the tradition of distribution of the material in the direction of the sea, through the “via di marina“, which saw the blocks loaded on wagons pulled by oxen and subsequently hoisted above the ships through the so-called “mancina” ** , a tool similar to a current crane.

for the second day tour and visit to Querceta and Seravezza with the exploration of the Antro del Corchia … but this is another story!

The Querceta village boasts numerous artistic workshops in which marble works are produced for international clients. From Querceta it is also possible to reach the white marble quarries of the Apuane, among which are worth mentioning those of Monte Altissimo and Monte Corchia. In Seravezza, a village not far away, it is suggested to visit the Museum of Work and Popular Traditions of the Historical Versilia, located at the Palazzo Mediceo, which exhibits the findings of the ancient marble work. In the small village of Pomezzana, in the municipality of Stazzema, the ancient Milani ironworks is active and open to visitors, you can see various tools used by marble workers to extract the blocks from the quarry and then sculpture in the laboratory.

Something is wrong.
Instagram token error.
Follow
In Versilia: the bicycle between the Alps, the woods and the sea